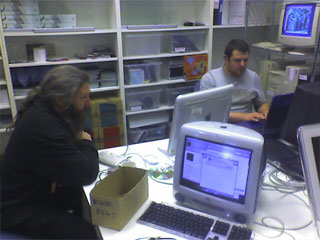 Arch-OS interpretation by Justin Roberts performed at the Peninsula Arts Contemporary Music Festival ‘VOICES II’. Friday 23 February 2007. Cube 3 Gallery, Portland Square , University of Plymouth. ‘Columbia Livia’ , part of a two-site installation, ‘Salva me’, commissioned by B ath Festivals Trust as part of a Year of the Artist Residency, and shown at the 2001 B ath International Music Festival, was ‘reversioned’ for a new installation through Arch-OS ( www.arch-os.com, an ‘Operating System’ for contemporary architectures). The Columbia Livia + Arch-OS version references ‘flocking’, a computer modelling technique coined by Craig Reynolds (1987) for the coordinated motion of groups of particles or ‘boids’. The visualisation of these algorithms mimics the flocking of birds and demonstrates principles of self-organization and the emergence of behaviors. The ebb and flow of people activated an acoustic ‘flock’ of birds (boids) that spun and wheeled around the void of the atria. ‘Columbia Livia’ deployd the sonic architectures enabled by the Arch-OS 56 speaker – 3 D sound system. A crucial feature of this version of ‘Columbia Livia’ was the emergence of unpredictable ‘complex’ sonic behaviours over the duration of its performance. http://www.arch-os.com/