Murmuration was one of the outcomes from the E / M / D / L – EUROPEAN MOBILE DOME LAB for Artistic Research (http://www.emdl.eu/) partnership of European and Canadian cultural organisations funded by EU Culture Program. This post contains information and documentation on this project component.

murmuration:
1: the act of murmuring: the utterance of low, indistinct, continuous whisper of
sounds or complaining noises, a mutter, the murmur of waves.
2: an abnormal whooshing sound emanating from the heart.
3: the mass cloud like flocking of starlings.
Late Middle English: from French, from Latin murmuratio, from murmurare ‘to murmur’.
A collective noun dating from the late C15th.

E/M/D/L Context:
E/M/D/L presents: Liminal Spaces, Dream Collider, and Murmuration, the culmination of a EU funded collaboration between Canadian and European partners. This research project was carried out through eight international residencies and is presented in the Satosphere of Montreal’s Society for Arts and Technology (SAT). Articulated through the fulldome environment as an instrument to explore transdisciplinary forms of artistic expression, these experiments oscillate between performance, interactive installation and immersive event.

We are made up of layers: the physical ones of skin and tissues, but also the intangible ones of history, tradition, images, and words. In the strata of sensations and accumulations of meanings, what strategies can be used to subjectivate such heterogeneous materials and find coherence among them? Where should borders be porous and where should they be strengthened? How can we let them breathe and allow them to change their contours? How to inhabit the threshold between two states, conditions, or regions – the transitory, the indeterminate? Sheltering layers of performance, interactivity and image, sound and text, the dome becomes the intermediary membrane between inside and outside, as it is explored and pierced through at the limit of palpable space.

Through an interactive journey in the narrated dreamland of crystallized daily scenes, Dream Collider questions the intertwined states of diverging oneiric ideas, the raise and collapse of these subconscious mind constructions, and the iterative processes leading the exploration of self-generated worlds. Initially created with the intent of expressing grammatical results issued from artistic research in the field of immersion, this dome installation highlights the relation and cohesion of physical and virtual spaces, and the place of the user as a living presence in between the layers of this multi-perspective narrative. Abstract collisions, premonitory visions or interneuronal recovery fluctuations; dreams have always been intriguing and are haunting our nights’ and days’ perceptions.

Murmuration [muttering of low, indistinct, whispers / abnormal heart sounds / mass cloud like flocking] is a series of trans-scalar and recursive transitions from the imaginary to infinity: i∞. Constructed from bio-imaging technologies and modeled fractured architectures, the low-poly-aesthetic of murmuration navigates its audience through playful interaction with particle swarms of digital detritus and real-time manipulation of virtual/physical audio-visual objects and the environmental experiences afforded by their continuously transforming arrangement. Algorithms of repulsion and attraction maintain the cohesion of nano/molecular landscapes harvested by atomic force. Bio-forms, like artificial organs, and boney architectures, temporarily seem to come to life, create cavities and cavernous voids, conjuring uncanny atmospheres of elation, intrigue and awe.

murmuration is a series of trans-scalar and recursive transitions from the imaginary to infinity : i∞

Swarming ‘Phage’ [particles/fragments/epithelium/boids] traverse the three domains, providing a focus for audience interaction and navigation. A murmuratiuon of Phage sweep noisily through the hollow space. Access to each domain is unlocked by interactions through the physical remains of fallen Phage. This detritus (control and feedback devices) is scattered around the floor of the SATosphere.

The Trans-scalar recursive spaces are reminiscent of biological architectures, planes and volumes reconstructed, nano/molecular landscapes harvested from Atomic Force Microscopy, skin from surface scans and deep structures and cavities from MRI scans. Radical shifts in perspective between these states of scale, the vast cavernous spaces and towering structures create uncanny atmospheres of elation, intrigue and awe.

Micro architectures emerge as structural entities hovering the void, nestling between abstract biological forms, like manufactured organs. Their structures are pliable and noisy, wailing and screeching like dysfunctional machinery. They dominate the view until they absorb the viewer. Now the inside out their forms become totally immersive to the point of transition back into the void.

Other larger scale assemblages of fractured phage-like objects, barely held together by semi-transparent scaffoldings, afford playful interaction with members of the audience and as they rotate and translate in unpredictable ways, they emit sounds and after a while are ‘ελκονται απο την αρνητική βαρύτητα and move onto the ominous global kelyfos enclosure of the “world”. Ultimately, the assemblages are dismantled to reveal the recursiveness of the movement within/through these consecutive worlds; one world nested into the other and revealing themselves to the audience in a recursive sequence..

Fluttering and buzzing in fits and starts of attraction and repulsion, the swarming Phage slowly become the thing they were once part of, fragments now form the whole.

The swarming Phage begin to converge, forming new figurative structures which congeal and begin to rise, escheresque from the abyss.


The Trans-scalar recursive spaces are:
murmuration builds on the research themes explored through the EMDL project:
Phage:
A particular output of this collaboration was the development of ‘Phage’ technologies, collaborative physical instruments that allow the manipulation of virtual objects within the projected dome space. These technologies are now flowing out of the Fulldome space and are being deployed within cultural and heritage institutions as a means of accessing new knowledge from museum artefacts, enhancing audience engagement and constructing a shared heritage through crowd participation.
Each physical Phage has its own characteristics and behaviours they: illuminate, listen, mutter, shudder, reveal inner recursive domains.
They are instruments for connecting across the membrane of the fulldome into dimensions beyond. This reach beyond the dome surface cultivates navigation through the recursive spaces and interaction with the dynamic evolving architectures. In the case of one of the environments, they are instruments for controlling the translation, rotation and corresponding evolution of the audiovisual fractured objects which surround the audience in the dome.
The design of each Phage is based around a set of parameters and personalities:

Transcalar Transitions:
Central to the navigation of these trans-scalar recursive architectures is the transitions between states, domains, architectures and sequences.
These include the shifts between the:
Audio:
The sounds of murmuration are complex, interactive and 3dimensional. They are attached to swarm Phage, located in physical Phage and anchored in the dimensional spaces of the bio and micro-macro architectures. They include: 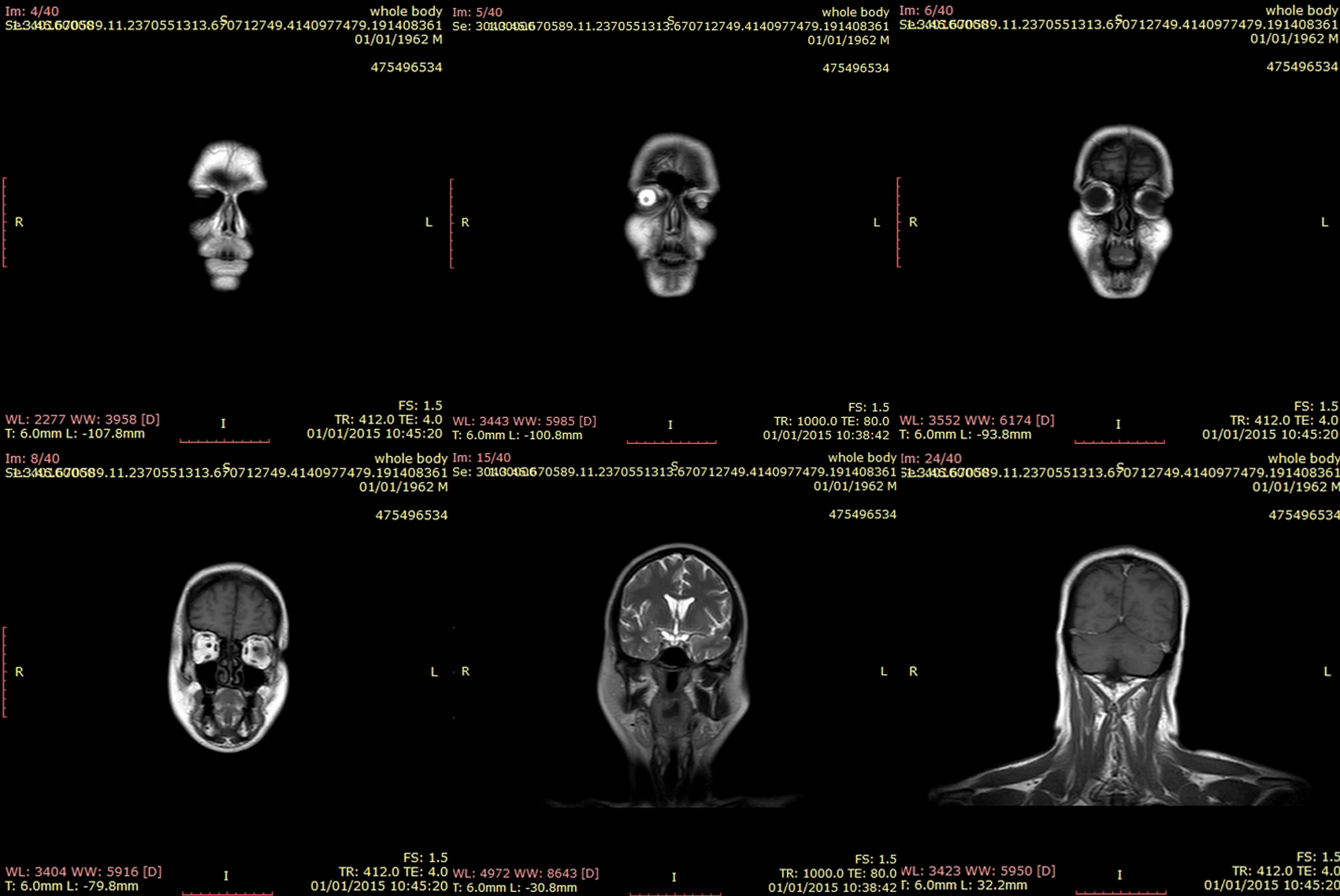 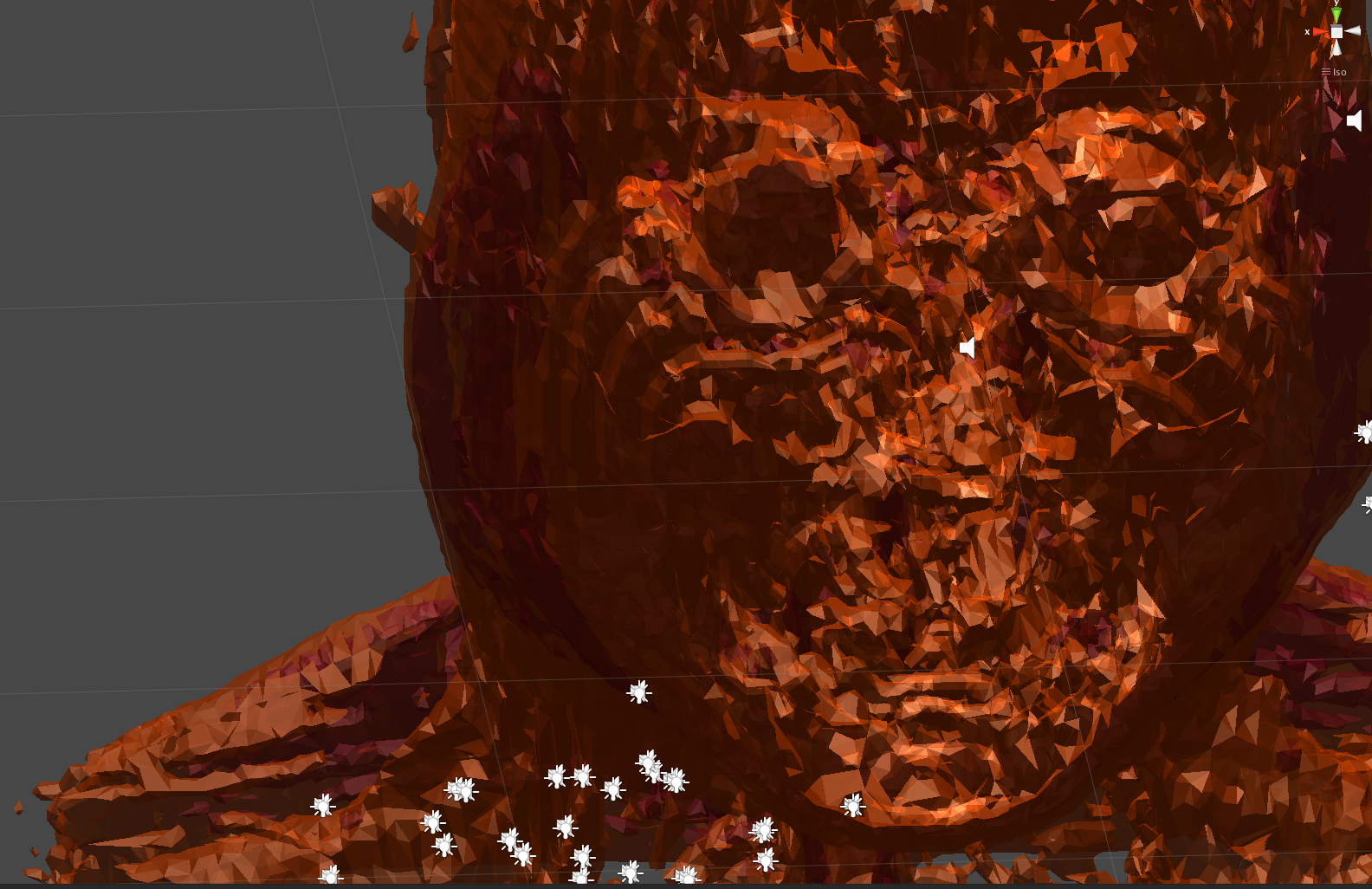 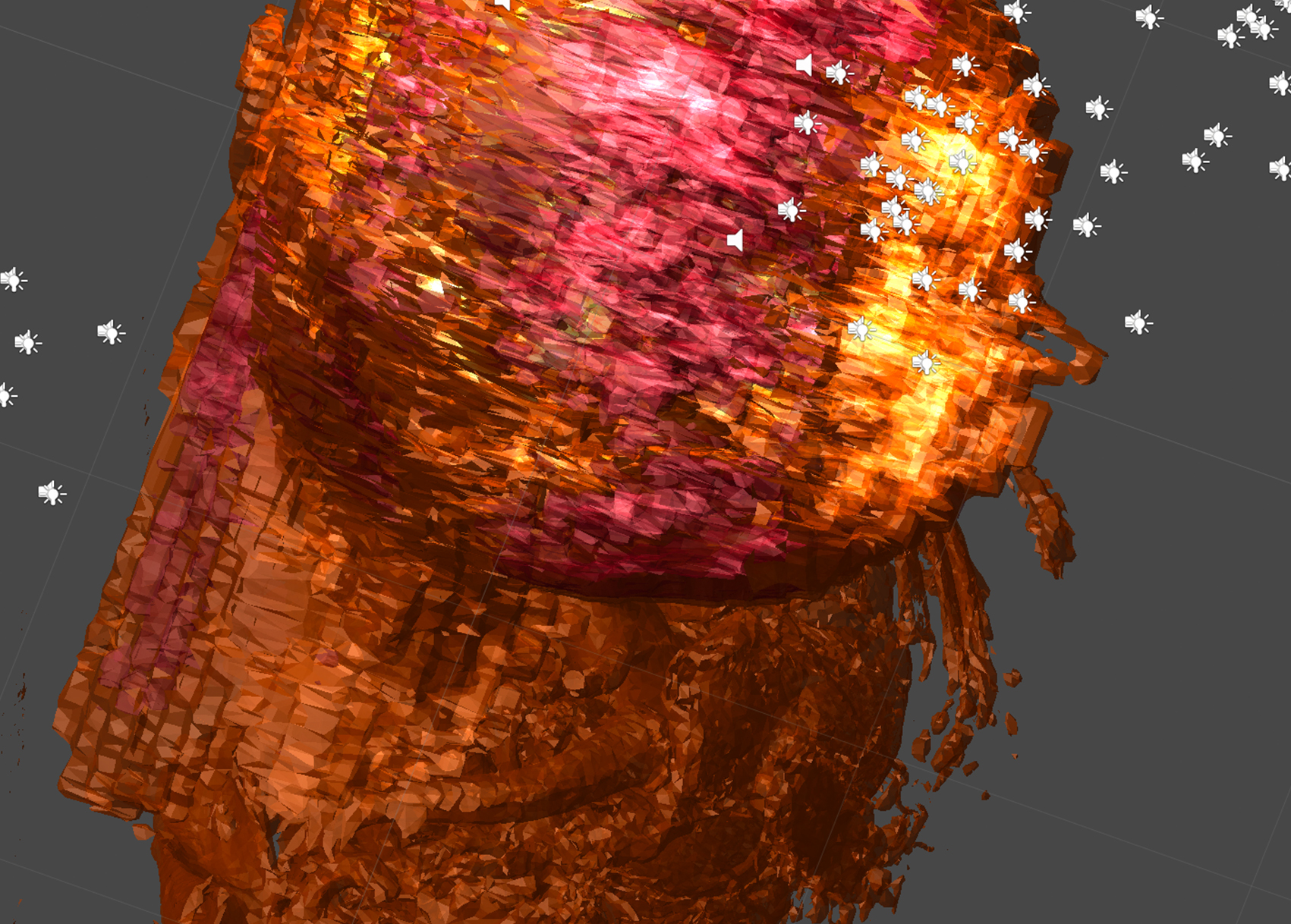 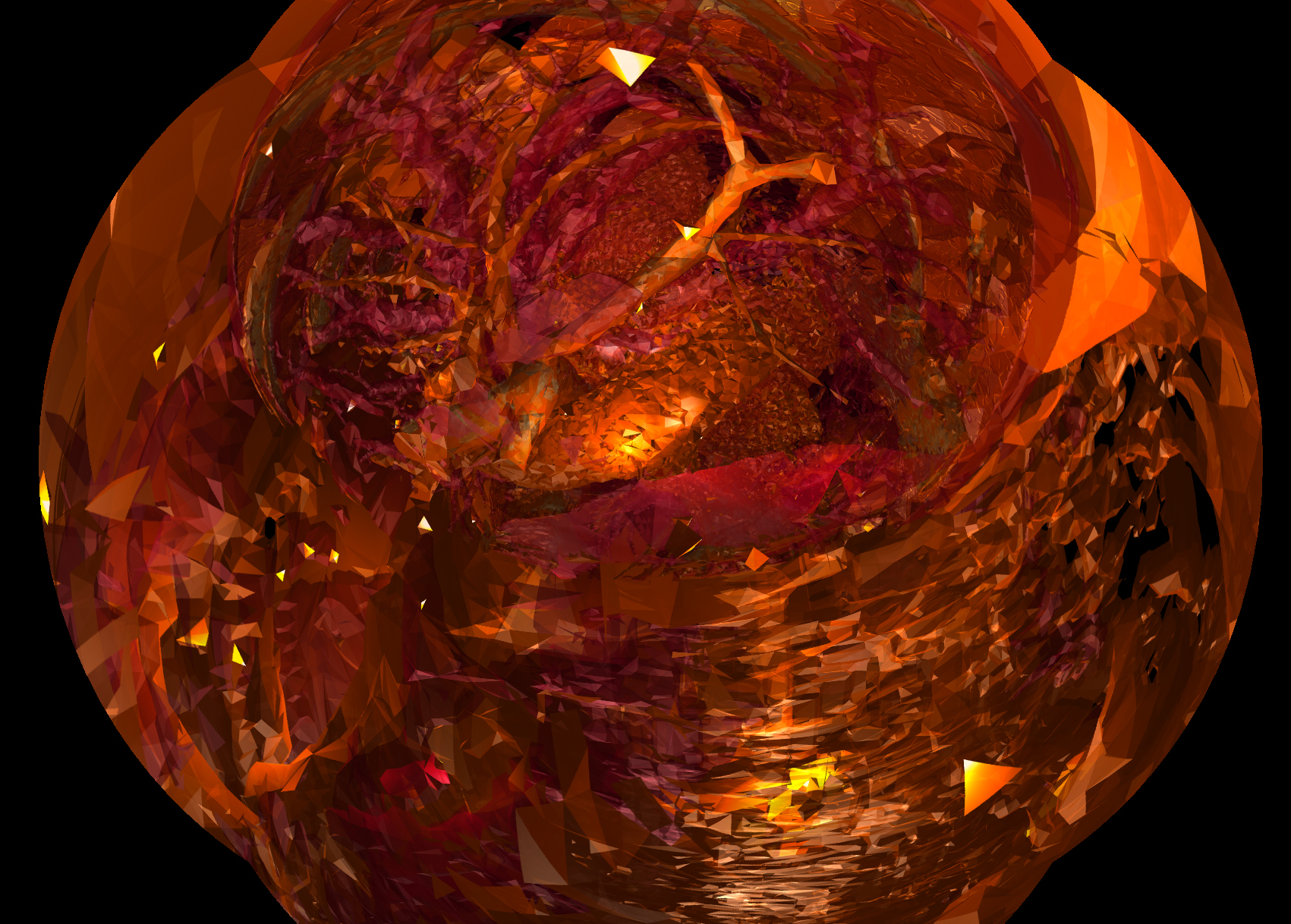 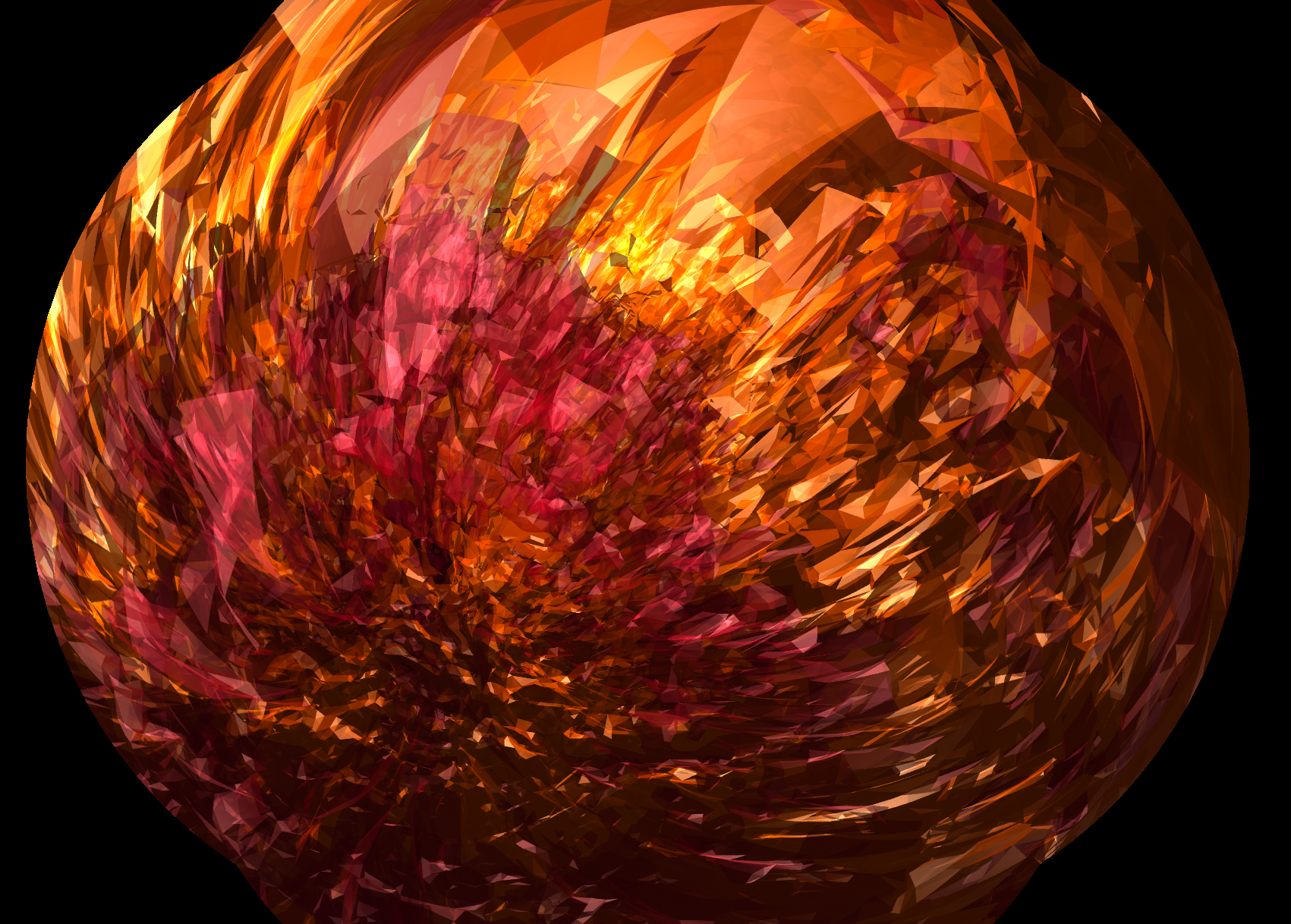 With thanks to the MRI Department, Derriford Hospital, Plymouth Hospitals NHS Trust for the full body MRI Scan.