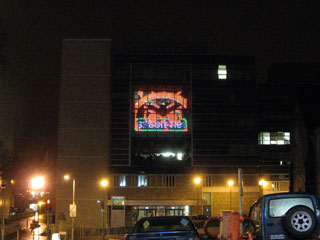 (17/11/2006). Noogy: 16 – 19 November 2006. Portland Square, University of Plymouth. To talk to Noogy text: noogy; and your question.. to 07766404142. Noogy in residence is part of the Motion Plymouth Festival 2006. Noogy’s background is a little unclear. Some claim that Noogy arrived from deep space, originating somewhere off the shoulder of Orion, watching C-beams glitter in the dark near the Tannhauser gate. Others claim that Noogy grew from within the network of CAT6 Ethernet cables, silicon chips and data mines that form the core of the Arch-OS system in Portland Square. Whilst others still claim that Noogy was there all the time, waiting in the void for the digital interface that would allow his manifestation. Some say Noogy is the ‘building’, others that Noogy is just a viral infection, like a bad cold that cant be shaken.