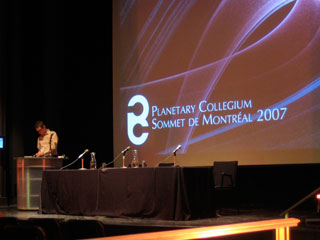 The First Summit Meeting of the Planetary Collegium, Montreal, Canada.19-22 April, 2007. C’ur des Sciences, University of Quebec, Montreal. hosted by Centre Interuniversitaire des Arts Mediatiques and Hexagram. Network consciousness, telematic interactivity and the media and metaphors of technology and science, have informed the vision of the Collegium since its inception as CAiiA at the University of Wales College, Newport back in 1994. Throughout the subsequent decade, developments in computing, communications, biophysics and cognitive science, hypermedia, telepresence and robotics created challenges in all fields: architecture, performance, dance, narrative, music, as well as the visual arts and design. New discourse was emerging and theory was not to be left behind. In this context, CAiiA-STAR flourished. As the pressure to expand increased, the Planetary Collegium was established, with its CAiiA-Hub in the University of Plymouth, and Nodes in Zurich, Milan and Beijing, with others pending. http://summit.planetary-collegium.net/