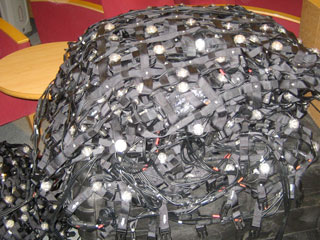 Built to communicate the Centre for Sustainable Futures (CSF) CETL (Centre for Excellence in Teaching and Learning) agenda and sustainable information about life at the University of Plymouth the ‘Green Screen’ has been installed.
This large scale LED matrix fill the top 3 floors of the windows of Atrium A of Portland Square. This full colour screen will display information and graphics that describe ecological and social data collated from a day in the life of the University campus.
Waterfalls of water will be seen cascading down the building changing in size according to how many taps were turned on and how many toilets were flushed in a day. Fire will leap up the building describing how much energy was used to heat buildings, and forests of trees will be seen to fall depending upon how much paper was used. The system will be publicly interactive through mobile phones and will be able to show a wide variety of movies, messages and graphics that the North Hill pedestrian and road traffic will be able to see.
The technology behind the screen is relatively low on energy consumption considering the nature of its affect. Consisting of 9600 LED’s over a 50m2 area the screen will draw 1Kw of power, which is comparable to less than 3 PC’s being on for a working day.
The management and development of the research project is carried by the Institute of Digital Art & Technology (i-DAT) with technical consultancy provided by Pyramid. i-DAT who will maintain the systems, are working closely with the CSF to design user friendly interfaces to allow staff and students to broadcast material.
Taking digital feeds from the campus building management systems that record live data about environmental, social and network activity, i-DAT are working with creatives to develop powerful and expressive media forms that engage and involve anyone passing by the screen. Operating from 4pm to 10pm the LED systems are low energy, flexible displays that have yet to be used on this scale anywhere in the world.